I don’t know about you, but I think gagging is one of the funniest human reactions known to man. I come from a long line of gaggers and every time I cough I gag a little. This is entirely inconvenient when my husband is around because he makes fun of me and my manly cough/gag. Apparently, Penelope has inherited this lovely reaction from my side of the family.

My sister and dad are also big gaggers but the funniest gagger of all is my nephew Case who is three. He’s really into Spiderman and when he came out to visit last summer I sprayed him with green silly string while he was jumping on the trampoline… you know, to make it look like Spiderman’s web? He stopped jumping immediately and started gagging. I was laughing so hard I could hardly help him get the silly string off.

Every time I sprayed it he gagged… and I laughed.

Then later on in the trip I shared my cupcake with him and he gagged on that. I just couldn’t win with this kid!  I wanted him to think that I was the coolest aunt ever but instead I just kept making him gag.

Well, this week I sent him a little Valentine gift in the mail that had a book, a mini tambourine and some silly putty in it. In the card that I sent I jokingly said that I hoped the silly putty didn’t make him gag…

This morning I got a phone call from my sister who couldn’t stop laughing.

She told me that Case fell asleep in her bed with his daddy… and the silly putty. Somehow the silly putty had made its way into my brother-in-law’s underwear. When he went to get into the shower he heard Case yelling, “DAD! What is that?!”

Shaun just looked at Case like he was just being silly and said, “It’s my bottom.”

Shaun had no idea what Case was gagging about until he looked in the mirror and saw that the silly putty was stuck to his butt.

When my sister told me this story I laughed until I cried… I am now 3-0 in making him gag. What the heck is wrong with me?!

Brent put me through a brutal workout yesterday that kind of made me want to throw up. But since I was working out with two of my friends I had to fight the gagging urge full on because I didn’t want to embarrass myself.

I decided to share it with you… you know, just in case you wanted to gag during a workout too.

(down the gym and back)

In between deep spiderman lunges we sat on a racket ball to workout the kinks in our  hips and butt.

The only thing I hate about lifting is the math involved. My one rep max was 180 lbs but that was before I got pregnant with Penelope so I didn’t think it applied. Therefore, I just put some weight on and lifted it.

Brent told us to keep adding weight gradually and lifting 5 reps at a time. This was how we were warming up for our one rep max.

Once the weight got to where it was getting pretty heavy we only lifted it once and then kept adding weight until we reached our max. I didn’t add up the weight until I was done and I was shocked to see that I had lifted 213 lbs!

I have no idea how I got so strong in such a short period of time but I felt like Wonder Woman… that is, until it was time to do the rest of the workout.

There were three of us working out and in this portion Brent had two of us standing at one end of the gym and one person standing at the other.

We had to do 10 heavy Russian Kettlebell swings and then push a weighted prowler across the gym to the person waiting. Then you got to rest while the other two took their turn. We did this for 12 minutes straight. 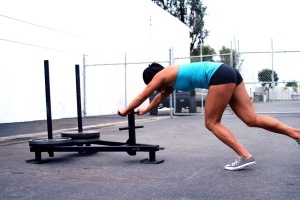 Don’t let the resting portion of this workout fool you! While doing it you don’t feel all that bad but as soon as you stop during your designated rest time you feel like your heart might explode through your chest.

Brent said that he had done that workout the day before and I am glad to report that he wanted to puke too. So that means I’m not a wimp…