I don’t know about you guys but I was kind of feeling a little gross after indulging in Memorial Day festivities. I didn’t eat a whole bunch of crap but I did eat some and after eating really clean it didn’t settle in too well. So first thing this morning Sir Scout and I went on a run to get things moving in the right direction again.

I had planned on waking up at five but Penelope is teething so I was super tired after walking into her room a million times throughout the night. I finally drug myself out of bed around six. I still had time to get back and eat breakfast before taking Bridget to school. She’s only got 3 and a half days left! Yay Summer!

I actually had other motivations at play when I took Scout on a run this morning. I want him to be too tired to dig in my garden. I just planted the rest of my seeds and I’m already scared enough that they won’t actually work without him digging in there.

You know that saying “You reap what you sow”… Well, let’s hope so. Otherwise I will have a garden of dirt.

In other news I have a new backyard problem. Her name is Suzy with the Nipples. She’s a hungry gal that Suzy. I’m guessing she’s either pregnant or has babies because she has got some crazy nipples… and a lot of them.

This isn’t an actual picture of Suzy.

Have you ever Googled “Squirrel nipples”? Well, I just did and I have to admit it’s not my finest moment.

I don’t know what I’m going to do about Suzy and her nipples but I just can’t be mean to her. In fact, I kind of feel like we are kindred spirits. It wasn’t that long ago that I had crazy nipples and I was super hungry too… hence, the weight loss blog.

What?! Breastfeeding makes you hungry!

Speaking of hungry I am super excited about the meal I have planned for dinner tonight! I can’t wait to share it with you… 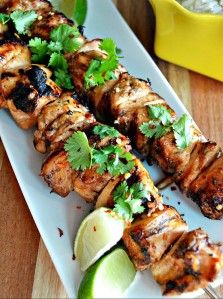 I don’t know if I’ll actually skewer the meat I may just marinade the breasts whole… depends on how much time I have.

As a side we are going to have… 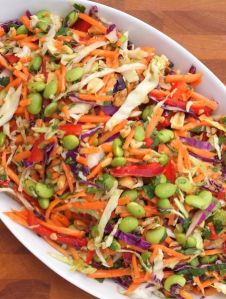 This recipe calls for edamame but my husband is deathly afraid of soy products (he’s afraid of getting man boobs) so we’ll skip that ingredient. We’ll also use broccoli slaw instead of the regular slaw because he prefers it.

Bridget and I recently found popsicle molds at the store so I think I might whip up some yummy Berries and Peach Popsicles while she is away at school for a special treat.

I’ve really been in a recipe rut until now and I’m so excited at the prospect of making some yummy food.

Have you guys tried anything good recently? If so please share, I could use all of the help I can get!

5 thoughts on “Suzy with the Nipples”