Anyone else out there suffering from a Halloween hangover?

This cracked. me. up.

Unfortunately that’s not how it went down at my house because Penelope was up at 4:30. In this case I was the frat boy.Since I was up so early I tried to write this blog post so that maybe you could enjoy it with your morning coffee… 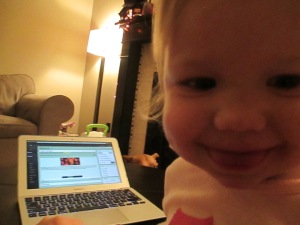 But somebody else had other plans in mind 😉

By 8:30 this morning I had already made my way through two and a half cups of coffee and had already gone through all of the stages coffee overload.

At least the crash couldn’t be blamed on candy consumption this year… which is a first. Surprisingly, I had absolutely no interest in raiding the candy stash after the girls went to bed. It might have had something to do with the Dirty Diaper matching game I made for Bridget’s class party.

Planning class parties for 6th graders is tough! You have to contend with the fact that everything is either lame or embarrassing… which is lame.  So, I went for embarrassing because you just can’t win either way. Plus, I wanted to see the looks on their faces.

They ended up loving it, which earned me a cool mom nod. 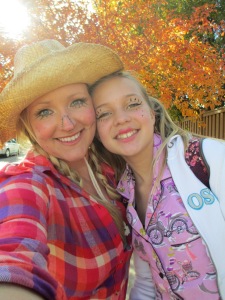 It didn’t last long because I had to drop Bridget off at her friend’s house to go trick or treating without me. Brent and I took comfort in the fact that we have another ten years before Penelope reaches that stage. 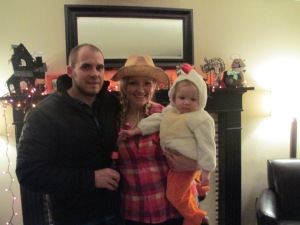 This morning when Penelope woke me up I was dreaming that someone was holding a pillow over my head so that I couldn’t breath. Once I got up I realized I was trying to nose breath through a brand new cold.

This doesn’t surprise me because Penelope has taken to licking strange things in order to get a reaction from me.

She’ll pick out the grossest thing she can find and then cut her eyes in my direction as if to say, “I’m gonna lick it.” I know when she’s about to do something naughty because her eyebrow twitches just like her dad’s does when he’s being ornery. She’ll give me that eyebrow twitch and that devious smile and lick it just so that she can hear me say, “EEW! DON’T LICK THAT!”

She thinks it’s hilarious! She’ll scrunch up her nose, throw her head back and squeal/giggle. Then later she’ll be sweet and want to give me a kiss.  Transferring all of her grody germs to me because she knows I can’t resist her kisses when she leans in for a big “MWAHHH!”

So when I woke up smothering in my own snot I didn’t feel like taking my monthly pictures as planned first thing in the morning. Then, when I saw Bridget (my photographer) stumble out of bed with her Halloween hangover it was confirmed that we were definitely going to postpone it until tomorrow.

In truth, it doesn’t really matter because I’m convinced they won’t look any different from the last pictures I took.

I’m in that dangerous place of being able to convince myself that I look good! Given, that I stand up straight, hold my arms a certain way and smile “just so” not to reveal my double chin. Since, I don’t feel like I look bad then I have a hard time staying motivated but I’m still just one cheeseburger away from obese. Therefore, I need to crank it up a notch before Thanksgiving rolls around.

Have you ever heard of HIIT Cardio? Well I plan on doing “HIIT” dieting… super focused on what I eat and how much I exercise until Thanksgiving rolls around. Then, I’ll relax a bit until the family leaves and hit it hard again until Christmas. That’s the plan anyway…

P.S. The making of this blog post took ten hours, three coffees, two naps and a sandwich.  So you’ll have to excuse me if it doesn’t make much sense. xoxo