Weird things have been happening around here and I’ve been too distracted to write about it until now… I feel like we have a lot of catching up to do.

The weekend started with the discovery that I had lost my wedding ring. Brent and I had gone to the gym to workout and since we were lifting heavy I took my wedding ring off and placed it in the tray located on Penelope’s stroller. Normally I tie it to my shoelaces but I was in a hurry on this day. I didn’t think about it until later, long after the stroller had been folded up in the gym parking lot leaving my ring to sit all alone on the asphalt as we drove away. I went back to search for it and it was gone… nowhere to be found. Brent and I will have been married for ten years this August and I was pretty upset about it. I still can’t think about it without getting teary eyed.

The rest of the weekend went by smoothly. I had a dinner date with a friend on Friday and spent some much needed girlfriend time. On Saturday we just hung out and played outside while Brent watered the lawn. Then we went on a few bike rides to compare how green our grass was compared to our neighbor’s. I’m not sure when comparing lawn color became such a fun thing to do. Brent and I have obviously hit some sort of maturity milestone together that I’m not particularly proud of. As we peddled along Bridget made sure we knew just how dorky we were. On Sunday Brent went to work and the girls and I made our weekly trip to the farmer’s market/book store where we sipped on fresh lemonade and browsed for great summer reads to add to our list.

The time flew and before we knew it, it was time to come home and put Penelope down for a nap. This provided Bridget and I the perfect opportunity to do what we do… snuggle and read in the lilac breeze.

Luckily Penelope is just as obsessed with the garden as I am.

However, she did get a bit emotional when I tried to rebury the worms that I had dug up because she thought I was smothering them. She was also convinced that they were hungry and needed a little cereal. Every time I take her inside she cries because she would rather play with the ladybugs that we bought and had scattered throughout the garden. 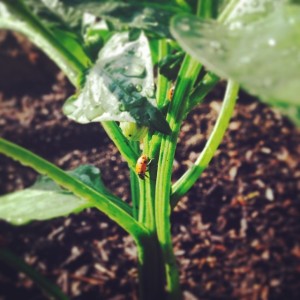 Luckily she has failed to notice that a few of the lady bugs that we had released didn’t quite make it and lay motionless in the dirt.

That night when I was adding my finishing touches to the garden Bridget came home from a friend’s house complaining about her wrist hurting. (She had fallen off of her friend’s scooter.) She refused to move her whole arm and I accused her of being dramatic. “If you hurt your wrist you should be able to move your arm.” I looked it over and saw a weird bump on her elbow so I gave her pain medicine and a bag of ice to sleep with that night.

The doctors at urgent care were convinced that she had broken her elbow and were concerned about the lack of feeling she had in her finger tips.  We were sent to Children’s Hospital to get a cast and a more solid prognosis. We got a little slap happy after spending so many hours in waiting rooms and ended up giggling more than is probably socially acceptable during our wait. 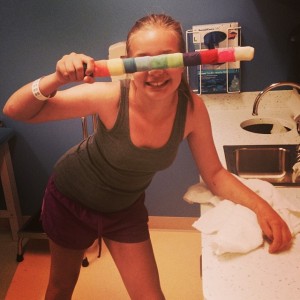 After waiting forever we were happy to discover that her elbow wasn’t broken after all and instead of having to wear a cast for 6 weeks like we originally thought she will only have to wear one for two weeks. They think she has a contusion on her ulnar nerve and it’s causing pain all throughout her arm, including her wrist. I don’t get it either… I’m pretty sure she’s wearing a massive cast due to a really bad bruise.

It was all fun and games until she realized that she won’t be able to move her arm for two weeks. She was bummed to find out that she couldn’t get the waterproof cast since it’s all the way up her arm. This means I have to bathe her… and dress her… and cut up her food in fork friendly pieces. All of that stuff isn’t so bad. Mainly the worst part is the fact that it’s the end of the school year and she has to miss out on all of the fun end of year activities. A lot of them are centered around swimming and dangling from play structures.

When she came home from school today she was teary eyed and upset about it all because was missing her Girl Scout troup’s end of year party. Therefore, I felt like it was the perfect time to bust out the banana ice cream recipe that I’ve been hearing about for an after school snack.

It is comprised of… a banana.

Basically you just take a frozen banana and blend the crap out of it until it looks like ice cream. Then you have to top it off with your favorite toppings. We chose chocolate syrup and sprinkles because everything is better with sprinkles.

It didn’t take the pain away but it put a smile on her face for a bit and that’s all that I was looking for.

2 thoughts on “Everything Is Better With Sprinkles”